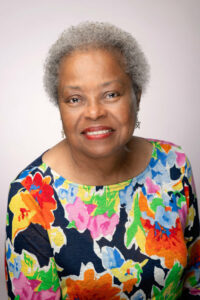 Smith established the Henry W. and Emily S. Smith Endowment for Families Fund, named for her parents, in 1995 to support nonprofits serving families and children throughout the Tri-County region. Her Fund has supported various local organizations and places of worship such as the YMCA and the Mother Emanuel African Methodist Episcopal Church.

Smith recently wrote and published a book about her father, Henry Smith, and his work supporting the Charleston African American community between the 1940s and 1960s.

“The Midnight Mayor of Charleston, South Carolina: The Henry Smith Story,” details her father’s story. He was a Black man focused on the social and political needs of the African American community when few could vote or hold any legitimate political power.

With proceeds from the book, Smith hopes to keep her father’s legacy alive and to continue giving back to her community long after she’s gone. She will donate a percentage of the proceeds to her Fund at CCF supporting many of the same communities as her father.

We had the pleasure of speaking with Smith recently about her Fund at CCF, plans for her book and thoughts on joining CCF’s new Lowcountry African American Giving Circle.

Q: The Henry W. and Emily S. Smith Endowment for Families Fund was established  in honor of your parents. In what ways did they inspire your philanthropic giving?

A:  My parents gave of their time, talents and treasure throughout their lives.  They could have written a handbook about kindness and relationship-building.  My mother started a club called “The Edifites” when I was in middle school. She wanted little Black girls to know etiquette tips when attending a tea party or dining in a restaurant.  She was a member of the YWCA and the National Council of Negro Women, among other organizations, and participated in many service projects.  I learned to volunteer because I saw her give time to serving others. My father was always the first to offer a family a car when transportation was needed for a funeral. He also made donations to the Liberty Homes Boys Club [North Charleston], the YMCA on Cannon Street, Avery Institute and other organizations.

Q: Your fund supports Tri-County nonprofits that focus on supporting families and children, something your parents were also passionate about. What impact do you hope to have?

A:  The socioeconomically challenged families in our communities have tremendous needs including food insecurity, housing assistance, transportation, and more. Many are very vulnerable right now. The fund established in my parents’ names will help nonprofits working in these areas.

Q: Your father, Henry W. Smith, was very influential focusing on the social and political needs of the African American community. Can you tell us more about his work?

A: My father was deeply knowledgeable about the economic needs of African Americans. He started a cab company in 1936 at the age of 23. He recognized that Black people needed transportation to get to work at all hours. Many Black people did not own cars and transportation via cabs was limited by white-owned companies. During discussions about integrating the Charleston Municipal Golf Course, my father helped with those negotiations.  From 1958 to 1961, he and a few others were able to convince the city that Black people should be able to play golf any day of the week (not one designated day). His business relationships with people of all races helped open the doors for Black people to be employed as bus drivers and tellers at local banks.

Q: You wrote a book about your father, “The Midnight Mayor of Charleston, South Carolina: The Henry Smith Story,” and donate a percentage of the book sales to your fund here at CCF. What does it mean to share your father’s story while supporting the community you care about most?

A:  I will not always be here to make donations to the fund established for my parents. If I can help grow the fund now (through these book sales), perhaps his story will continue. I am in the process of writing my mother’s story now.

Q: In addition to your fund at CCF, you recently joined our new Lowcountry African American Giving Circle. What intrigues you most about the opportunity to be part of the Giving Circle?

A:  I established the fund in my parents’ names in 1995 during Ruth Heffron’s tenure as a CCF leader. The Lowcountry African American Giving Circle will show that African Americans who are able do give. The CCF happens to be the conduit through which we can support families in need.

Q: What’s been the most rewarding aspect of working with the Foundation throughout the years?

A:  It has been gratifying seeing other friends and associates establish their funds there, as well.

To help support the Henry W. and Emily S. Smith Endowment for Families Fund, we encourage you to purchase Maxine Smith’s book, The Midnight Mayor of Charleston, S.C.: The Henry Smith story.