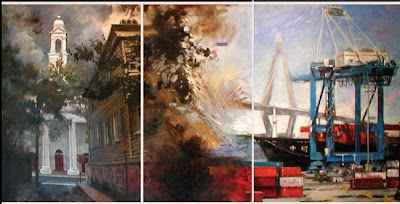 I was sharing a pizza with Elizabeth McKeever, the Griffith/Reyburn Lowcountry Artist of the Year, and Karen Ann Myers from Redux at lunch today. I had one of those moments when you realize that you are an outsider looking in. Karen had just explained to Elizabeth what Elizabeth’s award-winning triptych “Different Perspectives” meant. The patina on the left most panel of the three and the glassy look of the image there, the chaos in the middle, and the crisp primary colors of the modern port scene on the right panel were explained. I was thinking that Karen had some gall to explain to the artist what the artist’s own work meant.

Boy, was I wrong.

Karen said that the central focus of the left-most panel was a church steeple, rendering the edges of the panel in soft focus, which transitioned nicely to the center panel’s abstractions. From there it is a small step to the modern, and right-most image of the all-business port scene. Right and left became left-wing and right-wing. Church became soft like family, friends, and community. Port became right-leaning, hard-edged business and red state Republicanism.

Just as I was expecting Elizabeth, the artist, to stop her, Elizabeth smiled. She put down her slice of pizza and said “This is exactly what I have been waiting for. I retreated to landscapes for a while because I could not engage with the viewer. Now I have again, thank you.” Elizabeth went on to say “Art is not really Art until it is interpreted by the audience. Making Art is getting a reaction, an interpretation, a different perspective.

Boy did I feel dumb.

On Friday, February 11, 2011 from 5:00pm-8:00pm come make Art with Elizabeth McKeever at the first public event at the new Coastal Community Foundation Center at 635 Rutledge Avenue, Suite 201, Charleston, SC 29403. Talk with her about your view of “Different Perspectives” and celebrate her award as the 2011 Griffith/Reyburn Lowcountry Artist of the Year.