“You know I could do something big. I have done big fundraisers before.” That was Mickey Bakst of Charleston Grill talking up my dinner guests. I had heard of his success raising money for the Charleston Nine and so knew that this was not idle cocktail party chatter. A few weeks later I got a Saturday morning call from Mickey, excruciatingly early in the morning for me let alone someone who manages a restaurant at night (that should have clued me into his energy level). “I have an idea,” he said. Well, here’s what happens when you mix goodwill with lots energy, add a dash of creativity, a pinch of diplomacy, and simmer in Mickey’s special sauce.

You get Feed the Need. Mickey’s idea was to recruit 52 chefs to each provide a meal for 400 people over the course of a year at four different soup kitchens. That’s right, 52 chefs stirring the pot (and that definitely is not too many to spoil the soup). The first meal of an estimated 20,000 meals over the next year was offered at Tricounty Family Ministries in North Charleston. Crisis Ministries, East Cooper Meals on Wheels, and Neighborhood House will serve as additional distribution points. If you poke around on Google you find that Charles and Celeste Patrick of Patrick Properties (think Fish Restaurant) have blogged on the project and have joined in too. So has the Greater Charleston Restaurant Association. So has the Miami press. We are talking serious internet buzz here. What is going on? This idea has gone global. 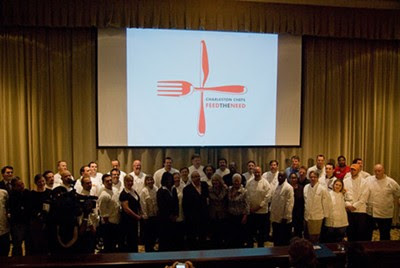 Paul Stracey, General Manager of Charleston Place Hotel and Managing Director of Orient Express Hotels in North America said that Orient Express intends to roll this idea out to its other properties in the US and around the world.

Now for the interesting tidbit that makes this story more than just your typical “atta boy” story. I had to twist Mickey’s arm to get him to even consider making this effort public. He wanted no publicity. Sometimes that selflessness gets lost in the bright lights and amplified speeches. The most successful efforts often have selflessness as a secret ingredient.