After losing her mother to cancer at a young age and father later in life to adult-onset diabetes and heart disease, Harriett has used her Fund to support healthcare in the Lowcountry while helping to spread the message of prevention. With a particular focus on heart disease, the Fund has continuously supported the Heart and Vascular Department at the Medical University of South Carolina.

Throughout the years Harriett has had the privilege of supporting causes near and dear to her and her family. Recently, she took a moment to reflect on this and the past 25 years of giving through CCF. 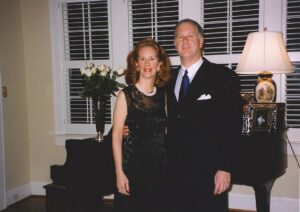 Q: The Daughtridge Family Endowment Fund was established in part to honor your parents, who were both very involved within the community. In what ways did your parents inspire your philanthropic giving?

A: The Daughtridge Family Endowment was established in honor of my parents, John Clarence, and Lois Steger Daughtridge. They were both involved in the community. My mother worked tirelessly for First Scots Presbyterian Church, the Association for the Blind, and the Junior League. My father served on the board of Ashley Hall School for over a decade and later in life served on the Heart and Vascular board at MUSC.

Q: The Fund benefits much of Coastal Community Foundation’s service area, focusing on helping those living with cancer, diabetes, and heart disease. Why is it important to you to support these causes, and how do you hope your giving helps community members living with these illnesses?

A:  The fund focuses on those living with or trying to prevent heart disease, diabetes, and cancer. My mother died extremely early of breast cancer at age 40. My father had adult-onset diabetes and died of heart disease at age 77. Herein lies my passion for prevention.

Q: As your top grantee, you’ve continuously supported the Medical University of South Carolina Foundation. What about MUSC Foundation’s work stands out to you?

A: The fund’s top grantee is the MUSC Foundation, the Heart and Vascular Department in particular. The number one cause of death in the state of South Carolina, in the United States of America, and in the world, is heart disease. It is critically important to spread the message of prevention and healthcare to as many people as possible. MUSC is the only academic healthcare center in South Carolina. Patients and families across the state are the beneficiaries of their research, education, cutting-edge technology, and world-class physicians.

A: Each church is a separate community, unique and special in its own way. I treasure both and greatly value the tremendous leadership and comfort that they give to our Holy City.

Q: In November, the Daughtridge Family Endowment Fund will celebrate its 25th anniversary at Coastal Community Foundation! What does the opportunity to support the community and causes you care about mean to you and your family?

A: This month the Daughtridge Family Endowment Fund will celebrate its 25th anniversary at Coastal Community Foundation. My, how time flies, and the next generation is now fully grown! We, my brother Belk and I have been greatly blessed in many ways, especially with our wonderful children. The bible says, “To whom much is given, from whom much is required.” We are a Christian family. It is our greatest honor and privilege to support worthy causes in our “unparalleled” coastal community. We look forward to the next 25 years and beyond.