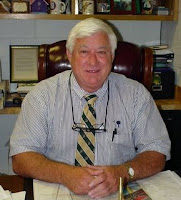 The gold watch was no doubt stopped months ago. The two “whereas”-laden proclamations petered out right before our eyes. I am here to document how Tom Lee and his friends have forever raised expectations.

James B. Edwards Elementary has been, for the past 30-odd years, headed by the much-loved Principal Tom Lee (pictured at left). Mr. Lee introduced visitors to his school as if he was welcoming them into his home. He introduced students and teachers as if they were part of his family. At his retirement party, while the big screen projectors scrolled through pictures of Mr. Lee in a Santa outfit, then a cowboy hat, then a construction worker’s uniform, and finally to a photo of Tom in a woman’s dress, you realized that James B. Edwards Elementary was his family, his life, his calling.

While they expected 300 guests at his retirement party, they got 500. Something drew them all there and it was not just the chance to party one more time with Tom Lee. At $25 a head the dinner and the silent auction that followed generated a tidy sum. The money raised will be used to create an endowment named for Tom Lee that will benefit students at the school forever. Everyone wanted to be part of the moment and part of the future too; when the only memory of Tom Lee will be an endowment fund that his friends created to support extraordinary projects at James B. Edwards Elementary.

We had seen in coming, when earlier in the day, our incoming mail was filled with checks made out to the Tom Lee Endowment Fund at Coastal Community Foundation. Liz Marshall, our office manager said “something big must be happening, look at all of these checks.”

The overflow crowd that evening wanted to mark the fleeting moment and honor their dear friend Tom Lee. Instead of reading aloud the proclamation from the Mayor, or spending time reading aloud the letter from the Senator, those papers were simply handed to Tom Lee.

What happened throughout the evening was much more meaningful to all involved than gold watches or fancy decrees honoring Mr. Lee. The audience wrote checks. Big checks, little checks, checks for auction items, checks for dinner, checks for any reason at all. Each of the checks touched the future through the newly created endowment fund. This fund will be a permanent and annual remembrance of Tom Lee that will preserve his spirit and concern for “his kids” and “his teachers” forever.

Be warned. At the next retirement party the gold watch won’t catch the moment or create the momentum like an endowment fund. The ante has been upped all the way to an endowment.